This week, Irish Rail launched the Online Payments facility for Fixed Payment Notices (which are penalties for fare evasion and other infringements).

The system is built using ASP.Net, C#, CSS and HTML5 and it is integrated with the Irish Rail Fixed Payment Notice Management system (a version of the Standard Fare Backoffice Management System which Dovetail previously developed for Dublin Bus).

Our work with Irish Rail, LUAS and Dublin Bus is all part of Dovetail’s continued involvement with the transport sector.

The following article appeared in the February 2016 edition of Rail Brief, the Irish Rail staff magazine.  You can view the PDF here. 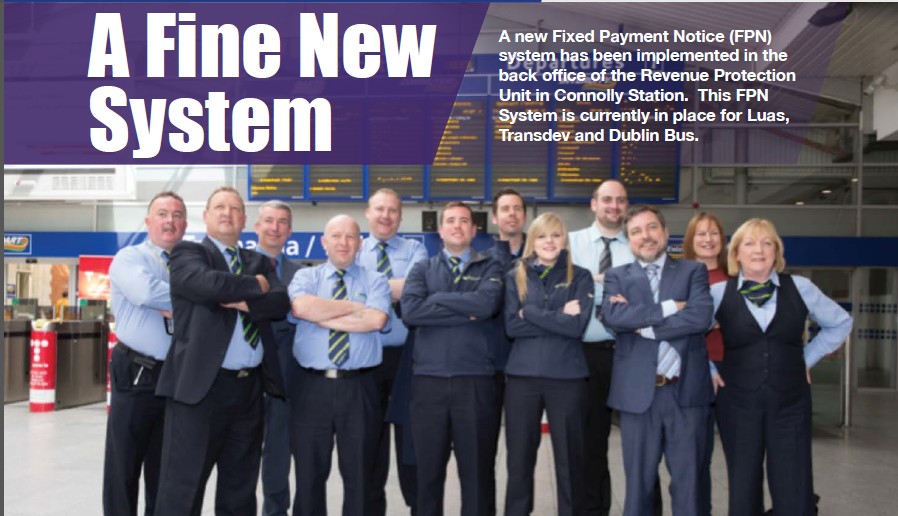 John and Martin with the Irish Rail Team in Connolly Station.

In 2015 there were 9,606 Fixed Payment Notices issued. There was a 22% increase in the number of Fixed Payment Notices issued in 2014 compared with 2013 and this trend remains in an upward direction putting more pressure on the system in use. As a source of revenue for us, it is critical that there is an intelligent information system to ensure detailed reporting and timely payment of fines.

Main Triggers for the New System

1. Two separate systems existed, one for DART and one for Innercity
The back office was using two disparate systems; Access and Infopath as both the Intercity & Commuter (ICCN) and DART had individual systems. This meant inputters were moving between systems with differing designs. These disparate systems continued when the RPU was centralised, meaning that the Head of Revenue Protection and the Revenue Protection & Prosecutions Manager had to interrogate each system separately and add the results together. Often they had to physically count original fines for statistics purpose as the original system didn’t allow for any meaningful interrogation. Another issue with the existing system was there was no single view across one person. A person could have a fine on the DART database but the ICCN database had no visibility of it.

3. Inconsistent design between forms and databases
The fields on the screen and the form didn’t match. As a result, it slowed down the speed of inputting as everything on the screen had to be matched to the form field for input. This contributed to a growing backlog and as a consequence, reminder notices, at times, were late going out to customers. This type of backlog can be very demotivating for an employee – no matter how hard the team worked, there seemed no end to it!

4. Databases were not built for high volume
There were over 38,000 records on the databases which were not built for high volume and as a result crashes often happened. Up to eight people could have been inputting at any one time
and the input may not have updated correctly. The resulting consequence was that a letter could go out to someone who has already paid a fine.

Roger Tobin, Head of Revenue Protection, has been leading the change project with support from Dave Cannon Manager Revenue and Prosecutions and Shauna Fitzsimmons on the systems side. The back office team have also supported the change process. The team worked with David Bettles Information Systems, Keith Faherty Online Manager, Group IT and Customer First in specifying and clarifying what the system requirements were before Dovetail could commence their work.

The team had been briefed on the full extent of the system change. These briefings were supported by the Customer First, People and Communications Lead, Linda Allen and were made
by Dave Cannon and Shauna Fitzsimmons. A training test system was set up by Dovetail to ensure all the team were comfortable with the system before it launched. They all found the system to be very straightforward and could really appreciate its benefits. The Dovetail systems supplier facilitated the training for all involved. They also provided systems support for the team to ensure the team were fully supported in the ‘go live’ and beyond. Brian Quinn, Business Process Lead, documented the new processes arising from the implementation of the new system. This was to ensure there was no ambiguity in the implementation and ensured the process in place was the optimal one.

Work is currently ongoing in setting up an online payment facility with a Go Live expected in February 2016. Currently there are limitations on payment options as a customer can only pay
during office hours, Monday to Friday 9am to 5pm. There will be huge benefits to the customer to pay online anytime as the back office team had received complaints from people who wanted to pay but couldn’t get through. This will also mean a reduction of phone calls to the office to allow the employees allocate their time on the key tasks of managing repeat offenders, analysing areas to target and managing files for maximum court prosecutions.

Customer First is currently looking at electronic solutions to make the RPU more efficient. Currently Revenue Protection Officers write out Fixed Payment Notices (FPN’s) which would mean real time inputting. There will be real benefits in the adoption of these portable devices.

Benefits of the New Dovetail System

One of the biggest benefits for the team is the removal of the backlog. All their hard work has significantly contributed to this. Other benefits include:

1. One single view of a ‘customer’
The new system can highlight fraudulent persons or highlight repeat offenders. It is able to supply fraud lists or repeat offenders across both systems.This allows for a more intelligent type of reporting and more successful prosecutions.

2. Better targeting of fare evasion
It allows the RPU team to more intelligently target times and services where there are fare evasions above average. The system allows them to interrogate information by multiple fields
e.g. by station, by time, by ticket types, by day of the week and by any other fields stored. The new system has all the information in the one place, it reduces the dependence on physical files.

4. Template letters created for all scenarios
Template files for all types of letter have been supplied to the new system and can be generated automatically.

5. Preloaded lists and drop down boxes
The new system will have these all lists preloaded along with the actual timetable. It will also have an address link with google maps eliminating the need for freeform typing.

Whether you have a specific need now or would like to explore, in general,
how custom software solutions might support your progress we'd love to talk.